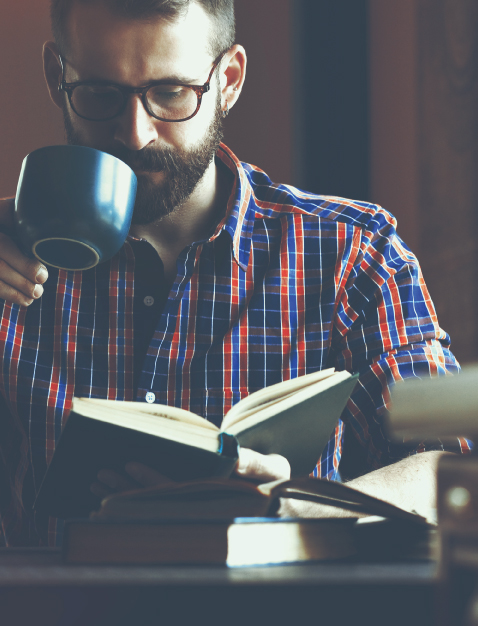 When Nobel Laureate Richard Thaler gave his students their grades, the average score was a 96. Out of 137, that is.

The previous exam had created uproar: The average had been a 72 out of 100. Even after he applied a generous curve, lifting the class average to a B+, his students remained furious. Their steady stream of complaints about the difficulty of the test worried the young Thaler, who had just begun his teaching career.

So on the next exam, Thaler adjusted the total number of possible points to 137. This test proved slightly harder; on average, students answered just 70 percent of his questions correctly. But when students viewed their scores, they were ecstatic. Although their grades were actually marginally worse, their moods were highly improved as they viewed numerical scores in the 90s.

Thaler has employed the 137-point scale ever since. He mentions it specifically in his syllabus, noting, “This scoring system has no effect on the grade you get in the course, but it seems to make you happier.”

Merriam-Webster defines economics as “a social science concerned chiefly with description and analysis of the production, distribution, and consumption of goods and services.” Given this description, appending the adjective “behavioral” would seem redundant. Production and consumption are behaviors or amalgams of many of them. Why insist on this difference in jargon?

For Thaler, one of the field’s leading voices, the value of behavioral economics lies in a single observation: Most economists study decisions, but not human ones.

Consider many of economics’ core principles: supply and demand, opportunity cost, or thinking at the margin. Behind these concepts lies a dramatic (and inaccurate) assumption: People are rigidly rational beings – calculating consistently in their own best interest and behaving accordingly.

Where, in this logical view of how people make choices, is there room for Thaler’s students? Which logical actor would prefer to earn 70 percent on a 137-point scale to 72 percent of 100?

In fact, economics has historically struggled to account for any of the rich, varied, and downright irrational influences of human psychology in our behavior. Within the neat models the subject proposes, feeling and instinct are conspicuously absent.

Behavioral economics wades into this murky territory of the mind, which economists had hitherto avoided. Using insights from other social sciences about the nature of human choice, thinkers like Thaler have radically reshaped the confines of their subject.

The resulting insights are more truthful, useful, and fundamentally human. Because merely 5 percent of our cognition occurs at a conscious, logical level, this shift finally aligns economic discourse with our lived reality. As another founder of the discipline, Daniel Kahneman notes, “It seems that traditional economics and behavioral economics are describing two different species.” 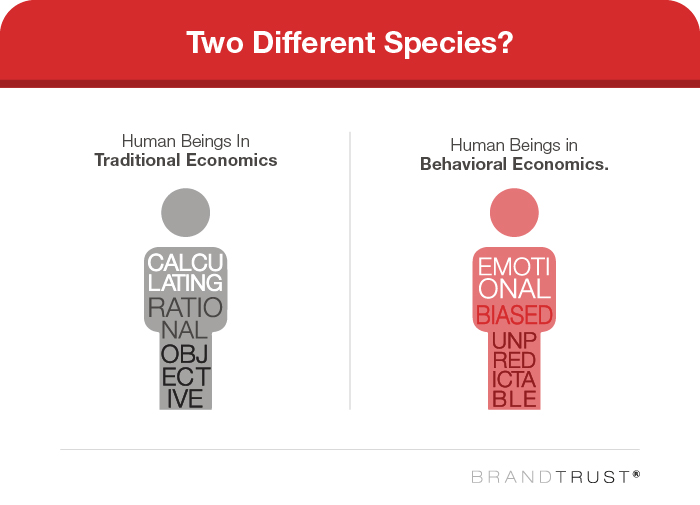 Of course, the impact of behavioral economics extends far beyond academia: It has sweeping implications for businesses of any kind. Business challenges are human challenges at heart, and when brands view their audiences as purely rational actors, their views are just as incomplete as those of traditional economists.

While humans lack objectivity on many matters, they may be most biased in assessing themselves. Numerous studies have demonstrated a tendency for participants to overrate their own performance on a range of tasks.

This phenomenon is distinct from bragging: We don’t exaggerate our abilities intentionally to impress. Rather, we earnestly fail to understand our own aptitude, erring on the side of self-regard. This ego-protective cognitive mechanism is called the “Overconfidence Effect.”

For businesses that ask employees to assess their own performance, this mental quirk can be painfully apparent. In one study of tech companies, as many as 42 percent of software engineers rated themselves among the top 5 percent of employees. In another research project at the University of Nebraska, 68 percent of faculty members rated themselves in the top 25 percent for their teaching ability.

The Overconfidence Effect might also have powerful implications for serving customers as well. One recent study found that roughly 80 percent of businesses felt they provided excellent customer service. Just eight percent of their customers agreed. Is your brand dangerously unaware of its own shortcomings?

This phenomenon also casts doubt on information reported directly by participants in traditional market research. Suppose your company is developing an instruction manual for a new product. In a focus group, you ask respondents to rate their confidence in assembling the product after reading your manual. Can you trust their answers?

In traditional economics, cost-benefit calculations are the means consumers use to make decisions. But what if timing could radically alter these assessments?

In a variety of contexts, humans respond far more to immediate rewards than those that require a wait. This “temporal discounting” contributes to our preference for immediate gratification in many forms, but the classic formulation involves monetary trade-offs. When offered $10 right now or $15 next month, we choose the first option.

For brands attempting to engage and retain customers, the power of making rewards immediate cannot be overstated. How can you seek to reduce the temporal distance between a would-be customer and the value you deliver?

Look no further than Amazon Prime for confirmation of this principle. How many of us would reconsider our desire for a product if we learned two-day shipping was unavailable? In part because of the promise of swift purchase gratification, Prime members spend nearly double what other Amazon customers do.

The fiery tennis star Jimmy Connors was infamously adamant about his approach to victory: More than he loved to win, he hated to lose. While most of us don’t abhor losing with the same fury (or profanity), Connors’ line aptly describes how the human mind assesses the pain of a loss relative to the pleasure of a gain.

The well-documented phenomenon of loss aversion refers to our tendency to place greater emphasis on the potential absence of something we already have than the acquisition of something we don’t currently possess.

In one recent study, airline passengers were told they could sell their right to recline in their seat. On average, those who usually reclined wanted $41 to give up their ability to do so.

Then the experimenters changed the default, telling passengers they could not recline unless they paid an additional fee. In this case, recliners said they’d pay just $12 for the privilege.

This finding is anathema to traditional economic thought: The passengers should value their ability to recline at the same amount each time, no matter how the question was framed. But in the minds of real passengers, losing that privilege seemed far more significant than gaining it.

Given how powerful a driver loss can be, how can your brand reframe your value proposition to really resonate with customers? 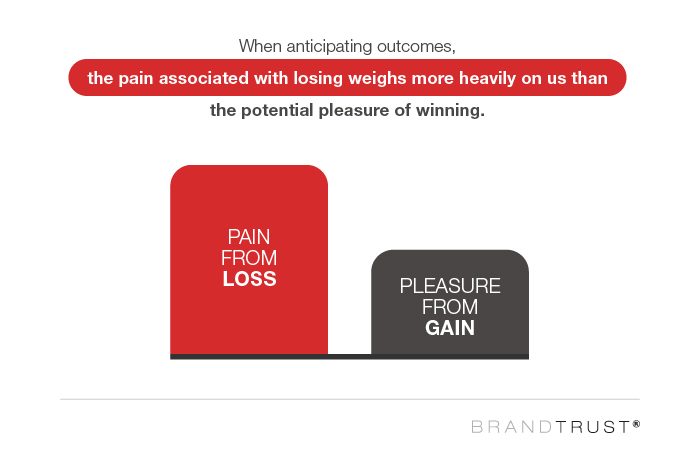 Anchoring and framing represent two other powerful deviations from rational calculation in the human mind. While traditional economics supposes our assessments of value and price are relatively static, countless studies demonstrate the power of context to inform our judgments.

Anchoring refers to our habit of relying too heavily on the first piece of information we receive. In an ongoing string of interactions, this initial impression sets the tone for how subsequent data are interpreted.

Good salespeople understand this phenomenon well: Car dealerships suggest a sky-high initial price, then let the consumer talk them down. The final offer is likely more than the car is worth, but it still feels like a steal in relation to the initial anchor.

Framing describes how the presentation of choice influences its outcome. The classic example relates to food on a plate: The larger the dish, the more we eat. Traditional economics can’t explain this cognitive bias: The rational consumer should eat until they’re full, regardless of how large their plate may be.

For brands in virtually any industry, these principles offer much power and responsibility. How can businesses employ framing and anchoring effectively – to explain rather than exploit? 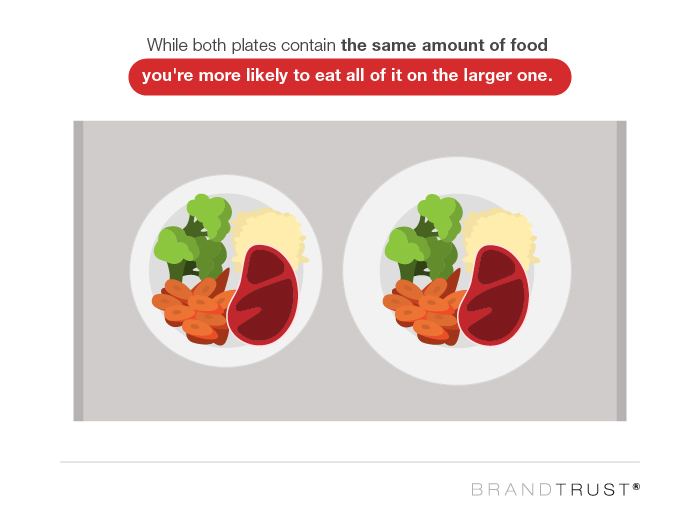 We’re all obliquely aware of social influence – none of us is completely immune to peer pressure or certain social imperatives, such as expectations about personal hygiene or politeness.

But the urge to align ourselves with social norms is more powerful than most of us imagine. At a psychological level, we’re instinctively inclined to conformity. And while social pressure can often be a pernicious force, it’s also an effective tool for motivating positive behaviors. These motivating influences are called injunctive norms (what society hopes you’ll do) as opposed to descriptive norms (what society does).

In one case, researchers tested two kinds of signage urging visitors to the Petrified National Forest in Arizona to resist stealing wood from the park. In the first instance, their message applied a description norm approach: Some people steal wood from the park, but please don’t do it. The corresponding rate of theft was 7.92 percent.

In their second approach, the researchers employed an injunctive approach: Please don’t remove wood from the forest, so we can all enjoy its natural state. The theft rate declined to 1.67 percent.

How can you align your brand’s vision with injunctive norms that matter to your audience? When your business is founded on the promise of shared ideals with customers, you’re far more likely to persuade them.

We owe this final cognitive insight to Kahneman, who observed that when forming impressions, humans unconsciously rely on the final and most emotional intense moments of an experience. This principle, since repeatedly measured, has been termed the “Peak-End” rule.

This Peak-End rule is then an essential guide for brands hoping to craft a great customer experience: It defines the junctures in the consumer journey with the highest stakes and how they should be ordered. While most businesses can’t deliver joy to their customers at every single moment, they can prioritize the instants that truly matter.

How can your brand capitalize on the Peak-End phenomenon to build a customer experience that people will recall positively?

Building a Brand on Human Truth

These insights from the world of behavioral economics can transform the way any business approaches its challenges. With conclusions rooted in psychological reality, rather than abstract theories, brands can begin to adopt strategies that truly speak to customers. That’s the nature of innovation: Clarity produces opportunity, and solutions to complex problems become possible.

For businesses to harness the full power of behavioral economics, however, they’ll need expert guidance and enlightened research. That’s the value Brandtrust delivers for many of the world’s most distinguished companies.

Through methodologies based in applied social science, our team helps businesses uncover and interpret the psychological, social, and emotional drivers of their customers and apply it to their business. Just as traditional economics offers only a partial picture of consumers, traditional market research techniques often offer faulty insights into each brand’s audience. Our methods produce deeper and more actionable conclusions so that you can build your business on an intimate understanding of your customers.

To learn more about our process and past successes, explore our work with some of the world’s biggest brands.

One of the seminal psychological insights of the 21st century began with a jar of jam. Or rather 24 of them – a total that would soon prove problematic. Psychologists...

Richard Thaler has news for you: Your brand probably isn’t selling to Spock. A founding father of behavioral economics, Thaler has dedicated his career to documenting the irrational quirks of...

David Hume had his work cut out for him as the title of his 1739 masterwork implied. The British philosopher’s “A Treatise of Human Nature” surveyed the work of ancient...