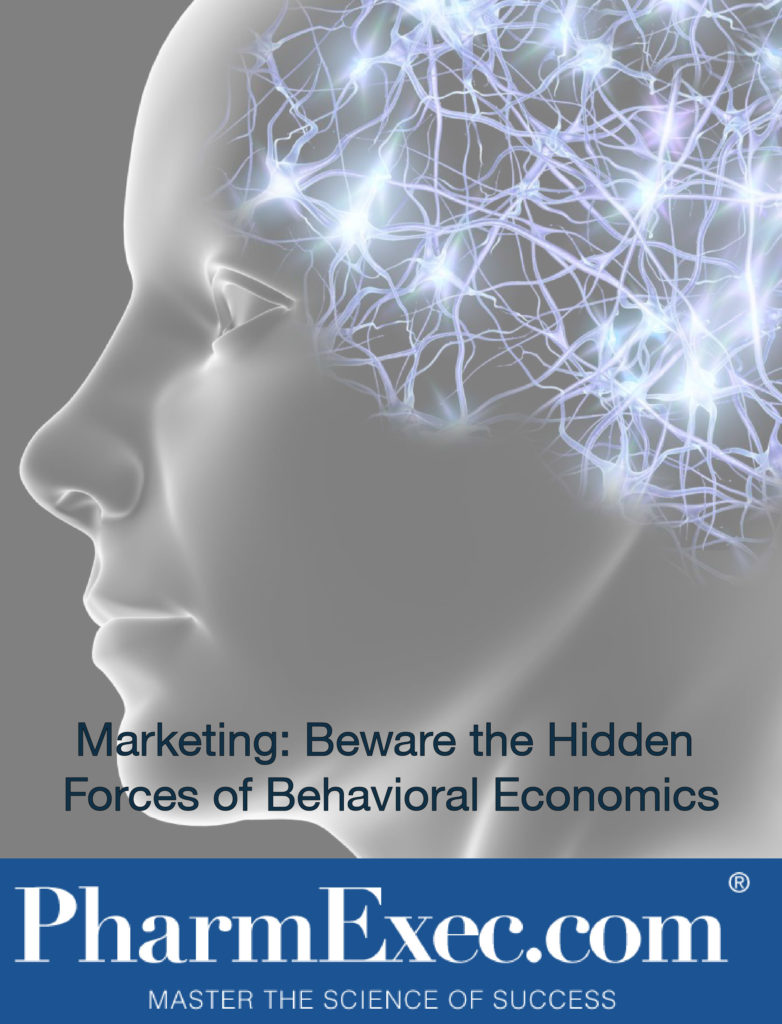 The below article was originally published within Pharmaceutical Executive Magazine, written by Brandtrust CEO, Daryl Travis.

Brand success can hinge on discovering the deeper motivations of customers and addressing the cognitive biases that result.

Over the past 15 years, a small ripple has grown into a wave of transformation in pharmaceutical marketing. It was born of the growing realization that patients and physicians are not the logical, data-driven decision makers classical economists want us to think they are. The truth is, patients and clinicians decide to use or not to use products and brands for reasons that are not always rational. Efficacy and clinical data become table stakes in many cases and, thus, are only casual factors in the choice of medications and pharmaceutical brands. In fact, an overwhelming body of evidence confirms patients and physicians alike often behave, dare we say, “irrationally.”

Throughout thousands of patient and physician interviews designed to reveal deeper motivations, we have observed irrational decision-making across many disease states. People are driven by a deep emotional desire to be and feel normal, yet illness and disease robs them of that potential. In chronic disease states, emotional well-being is replaced with constant reminders that a person will never again feel normal. Medication becomes one of those reminders and the desire to be normal is so strong, patients who could actually die from not using their medications still may not take them consistently. This is certainly not rational behavior and largely debunks the neo classical economics premise of functionality and rationality as the central motivations in human decision-making.

Our research has also revealed, across nearly all physician specialties, that deeper emotional motivations influence doctors to make treatment and prescribing decisions based on feelings, intuitions, and instincts versus clinical data. Physicians decide which medical specialty they will practice based on how they feel about themselves and what specialization they believe will best define and shape their own identities. Doctors who see themselves as thinkers and problem-solvers gravitate to diagnostics while others who seek a stronger sense of control will choose hands on specialties such as surgery and radiology.

The choice of medical specialty reveals early glimpses of how physicians’ treatment and prescribing methods are influenced by their emotional motivations. Diagnosticians are more likely to tinker with medications and play the role of alchemist until they feel they have cracked the code on the correct combinations. Physicians who need to feel confidence and closure will only prescribe what has worked for them in the past even if new products offer better patient benefits such as fewer side effects. While clinical data, efficacy, and side effect profiles are considerations in their decision-making, the data is often not the determining factor.

These deeper often-subconscious motivations create cognitive biases that influence decision-making outside of our awareness and prompt irrational choices. Physicians will insist they consider their decisions in a logical and rational manner but there is much evidence to disprove their argument. For example, from 1994 to 2003, the number of cases of children diagnosed with bipolar disorder increased by a factor of 40 times, effectively doubling the incidence rate in less than 10 years. Were there actually that many more cases or was something more irrational at work? As it turns out, the number of actual cases had not increased. Only greater awareness of a broader more arbitrary range of symptoms had dramatically invoked a newfound bias among many physicians to diagnose the disorder. The data actually refuted it but the cognitive bias nevertheless promoted the behavior.1

We’ve recently completed an emotional motivations study with a group of physicians focused on a specific chronic disease category. Our findings revealed these doctors actually encourage patients to choose their own medications. The physicians feel this approach will influence patients to better adhere to their medications. Even more tellingly, the doctors harbor the cognitive bias that they don’t ever want to be perceived as making the wrong recommendation.

These behaviors make up the cognitive illusions we instinctively accept as human nature. There are dozens and dozens of quirks, habits, and beliefs that reveal the human truths behind our behaviors. The ongoing study of these truths inspired the relatively new science of behavioral economics that has convincingly demonstrated we don’t often follow the best logic or even act in our own best interests.

Daniel Kahneman, the father of behavioral economics, conducted extensive psychological experiments that revealed and documented systematic flaws in the thought processes in our minds. Ironically, as a psychologist, he won the Nobel Prize in Economic Sciences for his work in understanding human decision-making. Even though cooperation between economists and psychologists is a somewhat new phenomenon, it is growing in a number of places within academia, government, and healthcare. In the UK, a government-sponsored Behavioral Insights Team has been established to conduct behavioral research and design behavioral change initiatives to influence behaviors such as timely payment of taxes and the effective use of government services.

Behavioral economics principles are also being used to promote better healthcare and healthy habits around the world. By understanding the deeper thought processes that influence health-related behaviors, we can deploy insights to design products and programs that encourage better health choices and positive behavioral changes. One example of a cognitive bias is our tendency to value the present and discount the future-emotional rewards in the moment are more appealing than the prospect of emotional rewards in the future. Another is attention deficit due to cognitive overload. We can overcome both by applying behavioral economics devices or workarounds to diminish the affect of the bias. Among many others, applications include raising rates of organ donation, educating about various health dangers, increasing use of condoms, enabling weight loss, reducing sugar consumption, and eliminating tobacco use. The secret of transforming behaviors is to alter the cognitive bias by making negative health decisions more difficult and good health choices seem easier.

What does this mean for pharmaceutical marketers and brands? If the power of behavioral economics can be used to increase healthy habits around the world, we can use the same disciplines to increase brand preference. First, we have to change the way we think about how our audiences make decisions. We have to accept they are not the rational decision makers we think they are. Then it becomes a matter of identifying and understanding how cognitive biases can be leveraged to influence behaviors within a product category or a specific brand. For example, research indicates the cognitive bias associated with expert opinions causes people to actually disengage their own critical thinking and irrationally defer to expert advice.2 So, if you appreciate the value of key opinion leaders for physician marketing, you already subscribe to behavioral economics principles.

Can behavioral economics be used to increase patient adherence to prescribed brands and dosing regimens? In one chronic disease study, we discovered constant reminders to take your meds increased anxiety and provoked lack of adherence. The brand decided to have the conversation in a different way and discuss what happens when patients inevitably skip their medications for a day or two. The brand seems to have gained influence with patients simply because it recognizes the emotional realities they face and has, in the patient’s mind, become part of the solution instead of the problem. In this way, the brand recognizes the futility of trying to change the cognitive bias and instead reframes it to the brand’s advantage.

Pharmaceutical marketers can also tap behavioral economics to optimize brand positioning and messaging. Researchers explored various cognitive biases related to flu shots and demonstrated how social norms can be leveraged to influence perceptions. Two groups of study participants were asked to read newspaper articles with different versions of the numbers of people receiving flu shots. One article described a larger percentage of people getting the shot and another version relayed that a larger number were not getting the shot. Then the study participants were supplied an article characterizing people who take the shot as considerate and those who don’t are inconsiderate of others. The participants were most influenced by the messages that deviated from what they were primed to believe was normal behavior for other people in their social sphere. Pharmaceutical brands can leverage these types of realizations by understanding the most socially relevant and emotionally resonant way to frame a brand’s position and messaging.

Pharmaceutical marketers can rely on behavioral economics principles to help them truly reveal the mind of their customers and why they do what they do. Discerning the deeper motivations of your audiences can help you design the most meaningful brand position and communications that will deliver tremendous returns for reasonable investments. A highly resonant brand message that addresses cognitive biases does not require hundreds or thousands of impressions. It connects with your audience the first time they are exposed to it. In fact, behavioral economics insights are often simple and inexpensive yet represent the most powerful thing marketers can do to change perceptions and positively influence behaviors toward their brands.

To view this resource, please provide the following info: