David Hume had his work cut out for him as the title of his 1739 masterwork implied. The British philosopher’s “A Treatise of Human Nature” surveyed the work of ancient and modern thinkers with a skeptical eye. Chief among Hume’s criticisms was an insight about our bias when assessing human choice and action: We give the logical mind too much credit.

Hume was fighting an uphill battle. For centuries, moral philosophers had crowned reason the ruler of our baser instincts, and Enlightenment culture championed the virtues of logic across the European continent. As Hume studied the dynamics of human choice, he became increasingly convinced that every decision stemmed from our “passions,” however much we liked to pretend otherwise. While reason plays a part, it is only with an emotional force that any choice becomes actionable.

“Reason alone can never be a motive to any action of the will,” Hume finally asserted. Nearly three centuries later, social scientists have only begun to understand just how right he was.

Every Decision Is Emotional

Marketers should be just as wary as Hume about misunderstanding the mechanics of human choice. For virtually any product or service, the modern marketplace is rich with alternatives – which is why effective branding matters so much.

Indeed, competition for the favor of consumers is more intense than ever before. Historical data demonstrate that merely 5 to 10 percent of new product launches succeed. Many brands lack the insights needed to truly reach consumers in a claustrophobic market.

Perhaps that’s because they’re looking in the wrong places: the conscious minds of their intended consumers. For years, brands have employed focus groups and surveys to understand the rational frameworks consumers use to assess products. Meanwhile, the disciplines of social science continue to prove that most decisions actually occur elsewhere, in the brain’s emotional core.

Noted psychologist Daniel Kahneman has spent much of his career articulating the powers of the subconscious mind, a realm of thinking beyond what we can observe and articulate in logical terms. He calls this mental activity “System 1” thinking, and it’s just a primary as his title implies, accounting for as much as 95 percent of our cognition.

This nonconscious neural activity includes “images,” a catch-all term for any sensory phenomenon reflecting emotional associations or memory. When we feel attraction or aversion to some person, place, or object, these images are often operative.

Kahneman has described the way these mental shortcuts function as “heuristics,” or deeply entrenched patterns we use to accelerate decision-making. To the extent that we experience this process at all, we do so emotionally: Positive heuristics equate to good feelings, even if we can’t quite explain why.

Thus branding succeeds and fails by it heuristic properties. It must align with consumers’ instinctive preferences, even more than their deliberative ones. But why would evolution shape our minds in this way? The answer is of essential importance to marketers.

According to experts in brain science, the nonconscious mind accounts for our daily survival. When the car in front of you comes to a sudden stop, or a baseball sails directly toward you in the stands, you don’t rationally evaluate your options before acting.

While these examples seem obvious, we rely on nonconscious pattern recognition much more thoroughly throughout our lives. Malcolm Gladwell has called this brain function “thin-slicing,” the process by which we react to people, places, situations, and things by rapidly assessing some small piece of them. Only by sorting these representative details into established patterns can we navigate an exceedingly complex world.

While this “adaptive subconscious” enables our continued existence, it makes introspection about our choices virtually impossible. “All that has been learned empirically about evolution in general and mental process in particular suggest that the brain is a machine assembled not to understand itself, but to survive,” writes E.O. Wilson, a prominent biologist. That means when people explain their choices to us, they are likely to be wrong.

This lack of insight about our own choices has a physiological basis: The analytical and emotional centers of our brains are connected, but distinct. While the neocortex accounts for our reasoning faculties, emotional responses originate in the limbic system. 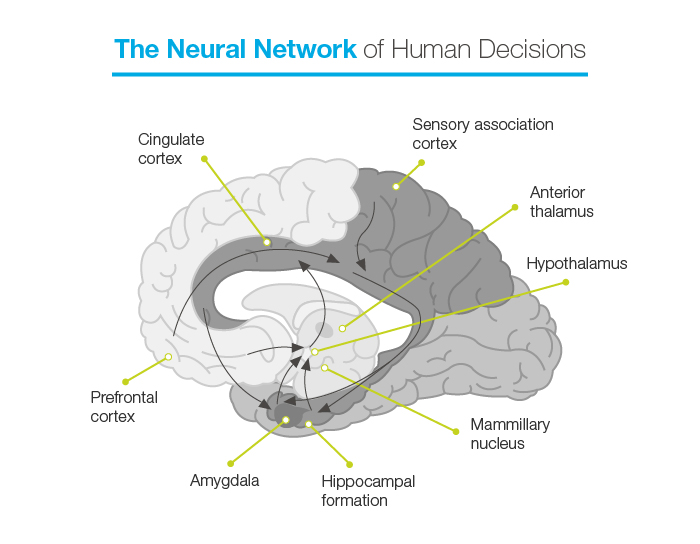 While these systems meet in the brain’s cingulate region to coordinate choice, they do so only once the limbic system produces an emotional signal that a decision is required. Without that emotional input, the analytical function is rendered incapable of reaching a decision. In other words, Hume was right.

When brands struggle to build emotional connections with consumers, they may be placing too great an emphasis on consciously held values. In due fairness, brands large and small can be misled by the red herring of reason.

In 1996, startup Home Access Corporation and health conglomerate Johnson & Johnson both introduced versions of a novel product: an in-home HIV test. Both companies gambled big on developing and marketing because their product’s appeal seemed undeniable. Who wouldn’t prefer the comfort and convenience of their own home to the clinical setting of a doctor’s office?

When these companies’ offerings hit the market, sales were virtually nonexistent. Neither company had predicted the emotional aversion their tests would produce in consumers, despite their practical advantages. In an age of great stigma and few effective treatment options, consumers shrank from the prospect of bringing a potential death sentence home with them.

This case of disastrous miscalculation is a powerful cautionary tale. But it also reflects three crucial mistakes that we’ve often seen brands make, and which we consistently encourage our clients to avoid at all costs. While we can’t be sure how each company determined to bring their product to market, we can suggest how each of these three errors in emotional branding was operative in this case:

Imagine you work for a pharmaceutical company, and you’re reviewing the results of a consumer survey related to your new product. An overwhelming majority of participants expressed anxiety about the prospect of visiting a clinic to be tested for HIV. When asked if they would prefer to be tested at home instead, many said yes.

You’re thrilled: Their responses seem to describe conditions ripe for the success of your product. But actually, they don’t. In the contrast proposed, your test is simply the lesser of two evils. Even that response is likely a function of priming, the act of unwittingly suggesting an answer through posing a question in a particular context. Focus on the rational, surface responses you solicit from your audience, and you’re bound to miss their deeper motives.

In 1996, more than half a million AIDS diagnoses were reported in the U.S., and the demographics of the disease seemed to be broadening. That year, African-Americans were diagnosed more frequently than Caucasians for the first time, and the proportion of female AIDS cases continued to increase.

Now imagine reviewing these stats as a corporate researcher: You see a population you can truly help. Yet you miss the anxiety and fear consumers feel about belonging to this growing group. However rich your data, it won’t automatically equate to understanding.

In many other industries, the value of practical convenience is paramount. As you evaluate marketing an in-home HIV test, you may be tempted to emphasize this principle as well: No doctor’s visit necessary.

For those concerned they might be living with HIV, the primary obstacle to getting tested is likely emotional, not logistical. In fact, many consumers might appreciate a medical setting where treatments can be suggested in the event of a diagnosis, rather than dealing with the results alone at home. In other words, the focus on customer convenience is a classic case of misplaced emphasis on the wrong element entirely.

How can marketers avoid these pitfalls in their own emotional branding efforts? For our Brandtrust team, nearly 20 years of seeking emotional insights for some of the world’s largest brands have yielded some powerful answers to precisely this question.

Our Emotional Inquiry® system employs extensive interviews with individuals to unearth emotional truths unreachable through traditional market research. Our research then yields implicit insights, the human truths that truly drive consumers’ actions – even and especially if they’re unknown to customers themselves.

We guide participants through exercises in relaxation and visualization, eventually unlocking the subconscious emotional content embedded in experience and memory. While these techniques are common in academic and psychotherapeutic settings, our team is the first to employ them to help corporations build brands that resonate with what customers really feel, want, and need.

Only with these realizations can a brand align its mission with the deep desires of its customers, achieving service even better than what they could consciously request. When brands limit their efforts to a rational understanding of their customers’ motives, they’re ceding the branding battlefield to competitors with emotional power. Still worse, they risk misunderstanding what their customers truly want, pursuing a purpose that won’t connect with consumers.

Hume would likely caution modern brands in similar terms. “Reason is, and ought only to be the slave of the passions, and can never pretend to any other office than to serve and obey them,” he wrote. Well, precisely.

To learn more about how Brandtrust uses Emotional Inquiry® to transform brands for the better, explore our work here.

The power of any brand is, simply, how your association with it makes you feel. You might say you have rational reasons for choosing one brand over another, but even...

Branding is the Most Powerful Yet Least Understood Business Strategy

Brands are about feelings and not facts. This is why businesses still struggle to grasp why people are drawn to some brands and not to others.

Brands are a Form of Self-Expression

When I say brands are about feelings, not facts, I’m proposing once again that people make buying decisions based on how what they are buying makes them feel. Does it make them feel more confident, secure, cool, pretty, smart, savvy, or happy? Does it represent their values? Would their friends approve? What do their choices say about them as people?